What is a Massachusetts Cohabitation Agreement? 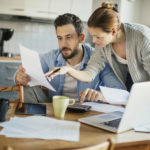 Massachusetts law does not recognize common law marriage. So when couples who have been living together (or cohabiting) decide to break up or when one suddenly dies, there is no “rule book” that controls how property is split up between them.

Massachusetts courts adopted the view that unmarried cohabitants could lawfully make contracts concerning property, financial, and other matters relevant to their relationship. In some respects, the cohabitation agreement is almost like a “kissing cousin” to a prenuptial agreement because it deals with some of the same issues that a “prenup” would, i.e., division of the money and property when the couple split up.

Let’s consider a short example of what a cohabitation agreement might deal with. Jane and John have lived together for 2 years. Jane has 2 young kids from her first marriage who live full-time with them. John doesn’t have any. Jane got the house in which they live in her divorce.

They have a joint bank account, they both have jobs and share household expenses pretty equally. When Jane got divorced, though, she bought her ex-husband out and the deed is in her name only.  Yet, Jane and John pay the mortgage every month from their joint account. Finally, they both own their own car in their own names.

Jane loves John very much and she feels that everything that they’ve been earning since they began living together belongs to both of them, yet she has very strong feelings about the house. She went through a lot of emotions during her divorce and worked hard to buy out her ex-husband. Jane feels that if she died before John, then she’d want him to live in the house for the rest of his life, but when he dies she wants the house to go to her children.

She also feels very strongly, though, that if they break up she shouldn’t have to go through the same fight she did when she got divorced just to get the house from John.

John knows what Jane went through in her divorce and he respects her feelings about the house. He also understands that this is the house in which Jane’s kids grew up and that she wants it to eventually go to them. But, John also feels that he contributes to the household equally now. His paycheck goes to pay the mortgage, the utilities, the internet and cable bills, and the insurance. He also helps maintain the house and does minor home repairs every weekend. So he feels like he has some “vested interest” in this house.

So what do they do about the house if they break up? The house and the mortgage are in Jane’s name only, so isn’t she entitled to just “kick him out” and not worry about anything? But John’s paid at least half of that mortgage for two years and he’s done a lot of work on the house to keep it maintained and to even increase it’s equity a bit.

John and Jane’s situation is merely a simplistic example of all the different issues that a cohabitation agreement might deal with. So, now might be a good time to look at cohab agreements in a little more detail and how they’ve developed over time.

If you’re interested in talking with Attorney Andrew Garcia about cohabitation agreements, just fill out the following form below and someone from our office will be in touch with you.